The following video stars Genevieve Aitken, a 25-year-old stunt performer and actress whose recent projects include Mad Max, The Hobbit trilogy and Evil Dead. Here’s a preview into what it means to be fully immersed in your workout: 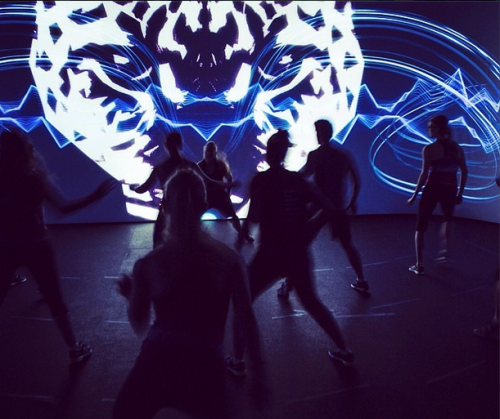 Together Reebok and Les Mills are showcasing fitness in the digital age. The Project: IMMERSIVE FITNESS™ draws inspiration from live music performance technology and 360° cinema to take the studio workouts to the next level.

“The Project adds a rich visual experience to music and group exercise choreography,” said Les Mills Program Director Les Mills Jr. “Participants taking part in a cycle class may find themselves riding up an impossibly steep glacier or sprinting their way around a digital velodrome. In a dance class you might be immersed in a tent at a music festival, where everybody’s dancing together.” 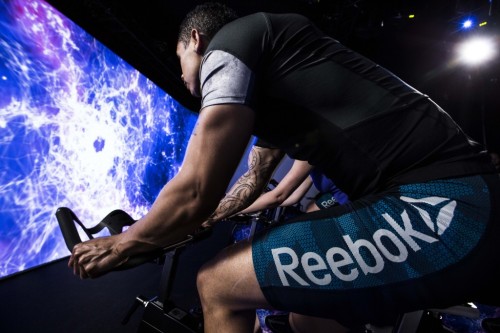 Phillip Mills, Chief Executive of Les Mills said, “The concept of ‘Immersive Fitness’ is all about what the fitness community refer to as the ‘zone’ – that state of mind where people are performing at their peak; a place of focus, achievement and fulfillment. At Les Mills, we have been creating group workout environments that lead people to the zone for 30 years; through music, choreography and rock star instructors. The Project really takes the zone to the next level and we, along with our collaborator Reebok, are so thrilled to share this brand new fitness experience with the world.”

Following its debut in London, The Project: IMMERSIVE FITNESS™ will make a promotional tour of major European cities including Stockholm, Berlin, Amsterdam, Paris and Milan, giving fitness enthusiasts the opportunity to experience the new program free of charge. A wider consumer launch in Europe and the United States is planned for 2015. Currently, there are plans for a US tour in 2015 that would feature pop-up, purpose built studios to allow consumers to try the experience.

What do you think about this next level of fitness? I think this sounds amazing and is something that would be a lot fun to participate in!!

This is a sponsored conversation written by me on behalf of Les Mills. The opinions and text are all mine.