If you’ve ever been dehydrated or even felt pretty close, it’s not a very good feeling. As a runner that lives in the Deep South (and profuse sweater), I’m always looking for something to help me stay hydrated.

For the longest time, I only drank water, which wasn’t a bad thing but I always wondered if I needed a little something extra. When I started going on my really long runs, I noticed that I was having over the top eye twitching and stomach pains after my runs, which was probably due to dehydration.

After hearing rave reviews about Nuun (pronounced “noon”) from the ladies at anothermotherrunner.com, we decided to pick a tube up (which contains 12 tablets) when we were at a running store in Jackson and give them a try.

Even before tasting them, I was really liking the fact that they were so “user friendly”.  A chronic user of  powdered water taste enhancers, it was nice to not have to struggle with tearing open a small package that may or may not open on the first tear and then making sure the powder didn’t spill on the side of the bottle, table or floor. (Yes, I can be that messy.) Nuun tablets, are just a little larger than a quarter and have an indention down the middle so they break into very easily. You simply drop them into your bottle of water and they quickly dissolve, basically like an Alka Seltzer.

Nuun sent me 4 tubes of flavors that I hadn’t tasted and I must say, I haven’t tried one yet that I didn’t like.

Here’s what the Nuun Web site says about their product:

-a nice, refreshing flavor to remind you to keep drinking

-a sprinkling of love

What’s not in Nuun?

-no sugar: we didn’t want to upset your gut or overwhelm your taste buds and wanted to give you more control over your calorie intake.

-no scary things (like crazy doses of caffeine) so you can happily drink Nuun morning, day & night.

-no artificial colors – do you need neon green to hydrate? need we say more…?

–the one-size-fits-all mentality doesn’t work in our active lives. we simply want to keep you hydrated… allowing you to focus on your gels, bars, bananas or cookies. Anyway, would you pick a sticky drink over a brownie if you had your choice?

How does Nuun help with hydration?

-Nuun’s special formulation of electrolytes helps increase the amount of water that’s absorbed into the blood stream. That means more of the water you drink is actually used to hydrate you instead of being eliminated because the electrolyte balance wasn’t right. Nuun is not energy. We designed Nuun just for hydration. It’s what we do best!

-Not only are cramps painful enough to stop you in your tracks, they’re also completely involuntary. Good news is, yes, Nuun can help alleviate cramps by keeping you hydrated better than water alone. Each sip gives you a consistent mix of water and electrolytes to ensure you stay properly hydrated and cramp-free.

-Many athletes with type 1 diabetes prefer to use Nuun rather than sports drinks containing carbohydrates, because it gives them greater control over the amount of carbohydrate they consume.

T1 diabetes is an autoimmune disorder of the pancreas that halts the body’s natural production of the hormone insulin. All athletes need to fuel with carbohydrates while training, but those with diabetes often need to have precise information about how many carbs they consume so they can measure their insulin dose accordingly.

It is difficult to know just how many grams of carbohydrate are in a “gulp” of sports drink. The carb content of solid foods or sports supplements such as gels, blocks, etc., is much easier to gauge. That’s why so many diabetic athletes choose Nuun for fluid and electrolyte replenishment and leave carb replacement to solid foods.

There are no plastic bottles. Every recyclable Nuun tube is equivalent to 12 bottles.

Yes, both Nuun and U Natural Hydration are gluten-free so it’s safe for those with celiac disease or gluten intolerance. Drink up, friends.

Nuun and U Natural Hydration contain no animal derived raw materials. They are enjoyed by vegetarians, omnivores and carnivores alike.

A burping athlete is not a good thing, so no, Nuun is not carbonated. When first dropped into water Nuun fizzes to dissolve, but once it’s finished dissolving it will very quickly become still.

Is Nuun legal to race with?

Many are surprised with their increased performance when drinking Nuun, but no worries, Nuun is totally legal. The only thing Nuun is laced with is sodium, potassium, magnesium and calcium.

Can my kids drink Nuun?

Sure, Nuun’s great for hydrating and it’s a great way to get kids to drink more water (instead of sugary sodas!).

With that being said, I can tell you that I have had my better (faster) runs after drinking Nuun in my water. I feel like I can breathe better and don’t fatigue as easily. I also drink it after my run and even when I’ve been sick and felt like I needed extra hydration.

Nuun has a very light flavor to it that you might have to taste a few times to get used to. It doesn’t taste bad at all, just not as heavily flavored as other drinks.

My favorites are Lemon-Lime, Strawberry Lemonade and Fruit Punch but they have a much larger selection to choose from.

Our personal collection of Nuun.

My brother recently started trying to run some and I gave him a few Nuun tablets to try. After trying the ones I gave him, he liked them so much that he bought his own. I asked him to write a short review of what his experience has been after using them:

“I am now officially a believer in Nuun. A couple weeks ago, my sister, Gina gave me 4 or 5 tablets to try. I wanted to spread them out on random days so that I could be sure that the effects, or lack of effect of the Nuun,  wasn’t psychological and also was not attributed to a good day or a bad day in the gym. The first one that I tried I felt more energy in the gym and I had a better run on the treadmill. The next time I tried something different when I went, and I did not have the same results. Overall, in my experiment with Nuun, each time I used a Nuun tablet before going to the gym, I experienced more energy throughout my whole workout. Also, it seems that each time I used the Nuun, I was able to breathe easier as I was running. I am new at running, and I am currently training for my first 5k race this fall. Each time I used Nuun before I ran, whether its increased energy that does it, whether it really somehow gives me more oxygen, or whether it is psychological, I find that I get less winded when I run. As of yesterday, I purchased two bottles of Nuun to continue my experimentation. One more thing I should add, the flavors I have tried so far taste really good and give the water a clean crisp taste.

I just wish they were easier to come by, the closest store that sells them is 2 hours away.”

Because I like Nuun so much, I decided to give away a tube to one lucky reader!

Want a chance to win a tube of Fruit Punch flavored Nuun?

As required by the FTC: I received a product sample in order to write my review.  I received no monetary compensation.

All opinions expressed are mine and mine alone.

After months of planning, worrying, ordering things, making a million phone calls and losing a lot of sleep, the race is tomorrow morning. If you haven’t been following my numerous posts on Facebook, no this is not a race that I’ll be racing in. This is my first race that I’ve directed. To say that it’s been a little difficult and quite the learning experience, would be a huge understatement. I am glad that I did it though.  (Hopefully by this time tomorrow I’ll still be glad I did it!)

Over a year and a half ago, I never dreamed that I’d run at all, let alone a 5k, 10k, half, etc. So, obviously the idea of me ever directing a race was not even on the radar…not even after I started running!

The main thing I’ve done to try to make this a race that people will enjoy has been to ask myself what are the things I’ve liked about races or didn’t like. This advice was given to me by Rod Simmons and my husband, Jason. They are both experienced racers and it does make sense, after all.

I didn’t like the couple of races that we went to that had only water and limited/no fruit or the one that we attended that didn’t even have prizes for the winners. I guess it was the feeling we got when we left that we’d basically paid a huge registration fee and ran for…nothing.

Anyway, there were other races that had great refreshments, like smoothies and that was something that is a huge plus in my book. So, one of the first things on my list when I was looking for sponsors was to call our local Smoothie King. They were gracious enough to agree to provide smoothies and I am more than excited to have them at our race! We always love goodies in our race bags, so I’ve managed to get a few of those to stuff in there. Plus, we have door prizes to giveaway too, which is always fun. We decided to go with medals for our winners instead of trophies but I think they look great and hope the racers think the same. 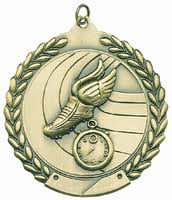 Well, I only have a few more things to do today before the preparations are done and all we have left to do is wake up in the morning and set everything up. (Kind of reminds me of Christmas.)

With that being said, I should stop blogging and get those last things “wrapped up”.

I hope you’ll be able to come, if you can and if you can’t, say a little prayer that things go smoothly for everyone – racers included.

I want this to be a race that will be on everyone’s “To Do Again” list!  🙂