Lately, it seems if I were a cartoon, I’d have ten arms – each doing something different. Of course, running hasn’t gotten in the way of all I’ve had to do because I’ve still been recovering from bronchitis. Btw, I think I’m finally ready to try and run again this week. I tried a little too early a couple of weeks ago and it was a big mistake. I still have a little cough now and then but I think (I hope) I’m well enough to start back.

We recently decided that we wanted to put our house up for sale and who knew what a major undertaking that would be? We have been cleaning out closets and giving tons of stuff away. Of course, by dragging everything out, an even bigger mess gets made. Add to the pressure of scheduling the realtors to come look at our house the night before we leave for vacation and you could say I’ve been pretty stressed out.

What really makes things hard for me is that our home is my fortress of solitude (even if we do have a houseful of kids, lol) and it’s really hard for me to open it up and let strangers examine every nook and cranny. I know it’s necessary but it certainly takes me out of my comfort zone! Maybe I’m just weird?  It’s also extremely hard to have our house on “display mode” with small children. I never knew how hard until I started trying to keep it that way, lol. The morning after we got home from vacation, the realtors called and said that they had someone that wanted to look at the house as soon as possible. Of course, we were still in pj’s, nothing unpacked, and things in disarray from coming back and basically unloading the van and nothing else.  Within 20 mins or so, they were here waiting on our front porch so they really got to see things as is. Yesterday, someone showed up after lunch wanting to “just poke their heads in” but ended up taking the grand tour. I guess I’ll get used to it but for now, I’m not liking this at all.

Vacation was wonderful! We left last Saturday when it was flooding like crazy down there (Florida) and really wondered if our entire week would be filled with clouds and rain but things finally started clearing up by Tuesday and we were able to enjoy lots of sun and beach time.

This was our view of the sunset on Sunday afternoon after storms had passed.

I brought my running clothes, shoes and watch, just in case but besides being completely worn out by the end of each day, I probably needed an extra few days to get well. The way I looked at it, I was on the move nearly the entire trip. If we weren’t in the water playing with the kids, we were out walking and trying to keep up with them. Zoe, my 2 year old, could be a race walker if she wanted to be, lol!!

She was very proud of her dress and sunglasses. She kept us on the move!

I’d like to say that I ate great and didn’t eat anything unhealthy the entire time but hey, it was vacation and I’ve always said that I will never starve myself or not eat something once in a while that isn’t on the healthy list. I did try to stay on track with drinking water though. All in all, it was lots of fun getting to spend time with the kids. Jason and I even got to sneak away for an hour (or more some nights) after the little ones went to sleep and the big kids held down the fort.

Waiting for the fireworks show at the Emerald Grande on Thursday night. 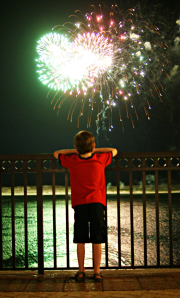 Zach watching fireworks. It was raining but still beautiful.

My swimming buddy for most of the time at the beach. 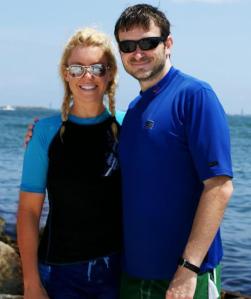 This week I’m hoping we can get back on a regular schedule….at least until Thursday, which is our anniversary and we’ll be going away again! (Only overnight this time though.) 🙂

Have a great week!

I nearly forgot to remind you that I will be directing the Race for Grace 5k again this fall. Look for an announcement soon on the official date! This year, proceeds will be donated to the children’s home Grace International is opening in the Philippines.